Updated October 22, 2020
SloPitch1.com is a directory of slo-pitch leagues, teams and tournaments in the greater Toronto /Golden Horseshoe area of Ontario, Canada including: Toronto, Etobicoke, Mississauga, Brampton, Scarborough, Niagara Falls, etc. with maps to all softball diamonds in the GTA; Toronto, Mississauga, Brampton; from Ajax to the Falls!

It was a cool day in the morning, but a great day for ball, great day to end the summer ball season!

Coed-D was a great division with Wins Below Replacement beating Yolo Warmers in the finals.

Contentious ending in the Coed-F1 finals with Phillies vs Looseballs. Winner Phillies.

Pass the Bunts beat Smokin Bats in the Coed-F2 finals.

Mens D was another interupted ending with Nationals and Down n Dirty both getting first place National qualifier hoodies.

The Has Beens beat Angry Pirates to win the Mens-E finals.

Thanks to all the teams that played. It was a great day!

It was a another great day. This has been an amazing August and September for ball.
I hope it stays nice for the last RSPA tournament on Saturday, October 3.

Coed-D1 was a tough division with Bat Attitude beating Winston Barkleys in the finals.

A great division with Wins Below Replacement beating PPL Legends in the Coed-D2 finals.
A lot of one run games and last place team Scallywags went 0-3 but only minus 6.

Flip Mode Squad lost last weekend in the finals, This weekend they beat Recking Krew to win the Coed-E1 final.

Warriors beat Looseballs in the Coed-E2 finals. Looseballs lost in the finals last weekend as well.

Mens D was an amazing division with Full Throttle beating Supersonics. H2O Cardinals 3rd, Strugglers 4th at 0-3 but only minus 7.

Eagles won Mens-E1 again beating Knuckleheads by one run in the finals.

Bunch of Bums upset Free Agents winning by one run in the Mens-E2 finals.

Mens Masters 50+ was a showcase of levels with Rampower vs Grey Sox in 50 Comp. I'm not going to tell how that turned out.
She Said I Could Play finally won beating Markham Canadians and Cobras won again in 50+E beating Average Joes.

Thanks to all the teams that played. It was a great day!

It was a another great day, with perfect ball weather.

It was a great day, maybe a little too hot for the 40 teams that showed up to play in the first RSPA Covid tournament.

Massive Hits beat Wins Below Replacements in the Coed-D2 finals.

Rampower dominated in the 50+ over She Said I could Play, Average Joes and Cobras, but all teams were winners.

RSPA Coed (7M-3F) slo-pitch league Mississauga, west Toronto-Etobicoke area looking for new teams/players for the 2021 season, RSPA is the largest coed league in the GTA with 180 teams in 26 divisions for 2019 and ALL the teams make the playoffs! RSPA offers the most coed divisions of any league, with divisions in SPN Coed C/D level, with several different levels of Coed "E", Coed "F" and a "Corporate/ Fun" division for corporate teams. We are SPN affiliated, fully insured and use SPN carded umpires. A great league, with lots of other activites — Volleyball Night; All-Star Night with home run, base running, throwing and other contests and FREE barbecue, and the BEST banquet in town!
Contact Randy Warren, accent@slopitch1.com -- www.slopitch1.com/rspa/
Looking for new teams and new players for the 2021 season!

Rulebook Changes:
Rule 2 Sec. 6: All players may wear a glove or mitt of any size, including a “trapper” style glove.
Rule 2 Sec. 9A, STG&OR Sec. 8 A: All those participating in a game shall wear the adopted TEAM UNIFORM, and must wear shoes, and shall wear properly. Manager/Coach or team representative when on the field, shall wear the adopted full uniform, shoes and if appropriate, jacket, which should include the teams emblem or similar attire that matches the colour code of the team, which can will readily identify them as a member of the team.
Effect: Sec. 9 A: Manager/Coach or team representative shall be asked to dress properly. If they refuse they will be removed until they are dressed in accordance with the team uniform. Protest is not allowed for the uniform rule.
STG&OR Sec. 1 F: Any Manager/Coach or team representative or player who is ejected from a game by an umpire for unsportsmanlike conduct shall automatically be suspended for his or her next schedule game. If the ejected person is registered to participate on more than one team, they may not participate for any other team until they have served their automatic suspension. His/ her actions will be reviewed by the tournament committee for further possible penalties or sanctions. Ejections which are not considered unsportsmanlike conduct, the automatic suspension for his or her next scheduled game will not apply.
SPN Policy Changes:
STG&OR Sec. 2 A Example: A player MAY compete, on one Masters division 35+ team, one Seniors division 50+ team, one COED team and one single sex (Men’s or Woman’s) team in the same sanctioned event, if registered as per (i) above. Example: A player may not compete in single sex (Men’s/ Woman’s) “A” and “C” nor may a player compete in Coed “B” and in Coed “E”. A Senior player may compete on one team in 50+, 60+ and 65+ in the same sanctioned event.
STG&OR Sec. 2 D: PLAYERS MAY BE REQUESTED TO PROVIDE PROOF OF IDENTITY. SUFFICIENT PROOF OF IDENTITY MAY BE TWO PIECES OF IDENTIFICATION (ONE OF WHICH MUST HAVE A PHOTOGRAPH ATTACHED) BOTH BEARING PLAYER SIGNATURE FOR COMPARISON PURPOSES. THESE TWO PIECES OF INDENTIFICATION SHOULD BE RECENT WITH THE PLAYER’S CURRENT NAME AS USED ON LEGAL DOCUMENTATION. NOTE: THE TOURNAMENT COMMITTEE MAY, AT ITS DISCRETION, ACCEPT VISUAL VERIFICATION OF IDENTITY FROM SLO-PITCH NATIONAL. RECOGNIZED PERSONNEL AS PROOF OF IDENTITY IN EXCEPTIONAL CIRCUMSTANCES ONLY AND WHERE THE PLAYER IS UNABLE TO PRODUCE TWO PIECES OF IDENTIFICATION AS DEFINED ABOVE WITH REASON ACCPETABLE TO TOURNAMENT COMMITTEEE.
STG&OR Sec. 10: Manager/Coach or team representative are responsible for ensuring the final scores once posted are correct. Manager/Coach or team representative of both teams must verify that the score on the home team’s official scoresheet is properly submitted. Any discrepancies in scores must be brought to the attention of the tournament convener immediately.
Official SPN web site: 2020 Slo-Pitch National Rulebook and Policy Changes
Updated May 21, 2020


SPN announced that the National Championship Divisions and Locations that were slated for 2020 will be hosted in the same locations in 2021. The Divisions and Locations that were announced for 2021 will be moved to 2022 and in the fall will announce the 2023 locations.
Official Slo-Pitch National web page. SPN National Championship sites
Brampton - Coed E, D, C, Comp and Mens B & Mens Masters 35C, 35D, 35E & Mens Masters 50 & Womens Masters 35.

Updated December 11, 2017
Slo-Pitch National recognizes and accepts ONLY the USSSA authorized bats
for use in the SPN program. -- www.usssa.com
All SPN approved bats must carry the USSSA stamp for use in the SPN Program.
Note: Local leagues have the ability to set their own bat policies.
Note: This rule is NOT in effect for RSPA Coed Slo-Pitch.
• SPN 2019 Rulebook available online. (SPN 2020 Rulebook coming soon).

RSPA Recreational Slo-Pitch Association
is a non-profit, recreational, coed (7M-3F) slo-pitch league for adults (16+/18+) in the Mississauga and west Toronto/Etobicoke area. RSPA is in its 38th year and is the largest coed league in the GTA with 180 teams in 26 divisions for 2019 and ALL the teams make the playoffs! RSPA offers the most coed divisions of any league, with divisions in "Comp", several different levels of "E", Coed "F" and a "Corporate/Fun" division for corporate teams. We are SPN affiliated, fully insured and use SPN carded umpires. A great league, with lots of other activites — All-Star Night with home run, base running and other contests and FREE barbecue, and the BEST banquet in town!
Looking for new teams and new players for 2020! - - www.slopitch1.com/rspa/ 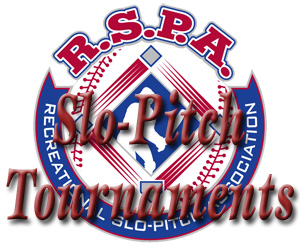 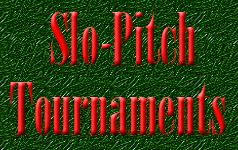 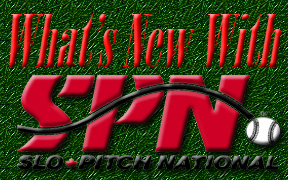